Thank you Nicolas for letting me borrow your blog to talk about my work.

I would like to present hierarchy, an Emacs library to create, query, navigate and display hierarchies. This library can be used to manipulate any kind of hierarchy. For example, a developer can use it with file hierarchies (see the file-system example)

A hierarchy is a set of items with a parent-child relationship. A hierarchy has at least one root, an item with no parent, and can have more than one (contrary to a tree which has one and only one root). An item of a hierarchy can be anything distinguishable with the equal function. Siblings are items with the same parent.

In the following we explore some parts of the library’s API so you can start using it in your own project right away.

There are two main ways to create a new hierarchy: either through functions describing the parent-child relationship or through a nested list.

To create a hierarchy from functions, you can write something like that:

It is also possible to create a hierarchy top-down by passing a fourth argument to hierarchy-add-tree in this way:

At this point, animals and animals2 represent the same hierarchy as can be verified with hierarchy-equal:

The second way to build a hierarchy is to start from a nested list:

In this case, the nodes in the resulting hierarchy are not symbols as in hierarchy and hierarchy2 above, but sub-lists:

Each line of the text above shows an item indented depending on its depth in the hierarchy (i.e., the number of parents before reaching a root).

You can pass an optional argument to hierarchy-print if you want to only print the car of each sub-list:

The hierarchy API provides its fair share of functions to query a hierarchy.

There are several ways to iterate over items of a hierarchy. The simplest function is hierarchy-map which returns a list of the result of applying a function to each item. For example, to get a list of items and their depths in the hierarchy, you can write:

We have already seen the function hierarchy-map-hierarchy that builds and returns a hierarchy from an existing one by applying a function on each item (just like mapcar does it for lists).

Finally, hierarchies can be displayed in many different ways. We have already seen hierarchy-print which formats a hierarchy as text in the current buffer. The functions hierarchy-tabulated-display and hierarchy-tree-display are respectively responsible for displaying a hierarchy as a list of elements and as a tree (as can be seen in the beginning of this article). For example, to display our hierarchy of animals: 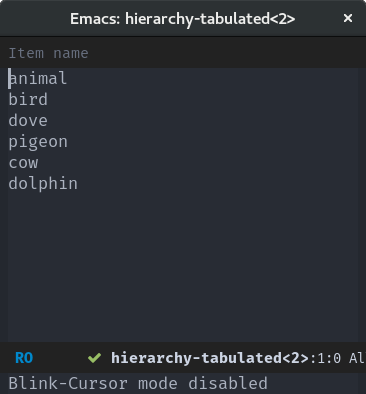 The functions responsible for displaying a hierarchy take a function as parameter whose name is labelfn. This name indicates that the function should take two parameters (an item of a hierarchy and an indentation level) and insert some text in the current buffer. The hierarchy API provides several functions to help you build a labelfn function. For example, if you want your animal hierarchy printed with indentation and clickable labels, you can write something like that:

The hierarchy library features an easy to use API to create, query, navigate and display any kind of hierarchy. This library has already been used to display hierarchies of files and classes as well as to navigate JSON structures. All functions are well documented and tested.

Have fun playing with the library.