Elbank is a new Emacs package I’ve been working on lately. It’s a personal finances and budgeting package for Emacs that uses Weboob for scraping data from bank websites.

I started building Elbank after using Ledger for several years. While Ledger is a real gem, I didn’t want to spend time doing bookkeeping anymore.

Instead, I wanted a simple reporting tool that would automatically scrap data and build reports within Emacs from it.

To use Elbank, you will first have to install Weboob. Weboob is a collection of applications used to interact with websites from the command-line. Elbank uses the banking application named boobank to scrap data.

The list of currently supported bank websites is available on this page.

Fortunately, installing Weboob should be a breeze as there are packages for most GNU/Linux distros, and an homebrew formula for Mac users.

Once Weboob is installed, run boobank in a console to setup your accounts.

You can now install elbank from MELPA1 by running M-x package-install RET elbank RET, and voila!

Run M-x elbank-overview to get started. The overview buffer lists all accounts as custom reports and budgets.

Press u to import the bank statements from your bank website.

Transaction categories is an important aspect of Elbank. Categories make it possible to filter and budget.

Here’s an example value for elbank-categories, you should adjust it based on your own transactions and categorizing needs.

Each transaction’s text is matched against the regular expressions of elbank-categories, the first match defines the category of a transaction.

Evaluate M-x elbank-report to create a new report. The command will ask you for an account, period and category, which are all optional. 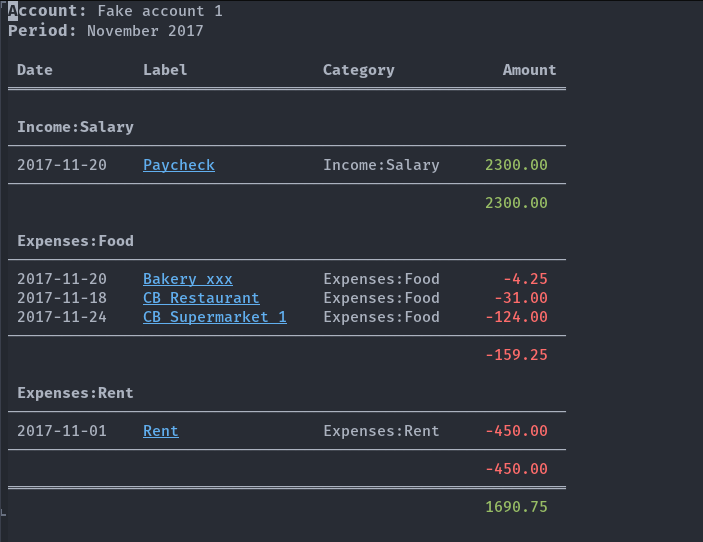 Here’s the list of keybindings available in a report buffer:

You can also customize the variable elbank-saved-monthly-reports and elbank-saved-yearly-reports to conveniently get a quick list of commonly used reports from the overview buffer.

The custom variable elbank-budget is used to define a monthy budget. It defines how much money we want to spend by category of transaction, like "Food" or "Rent".

Note that budgeted amounts are positive numbers while expenses have negative values.

Press b from the overview buffer or evaluate M-x elbank-budget-report to see your expenses based on your budget.

You can switch periods with M-p and M-n the same way as in report buffers.

That’s all for now!

Elbank is still in its infancy, but I’m already using it daily. If you find any bug or would like to suggest improvements, feel free to open a ticket on the GitHub project.